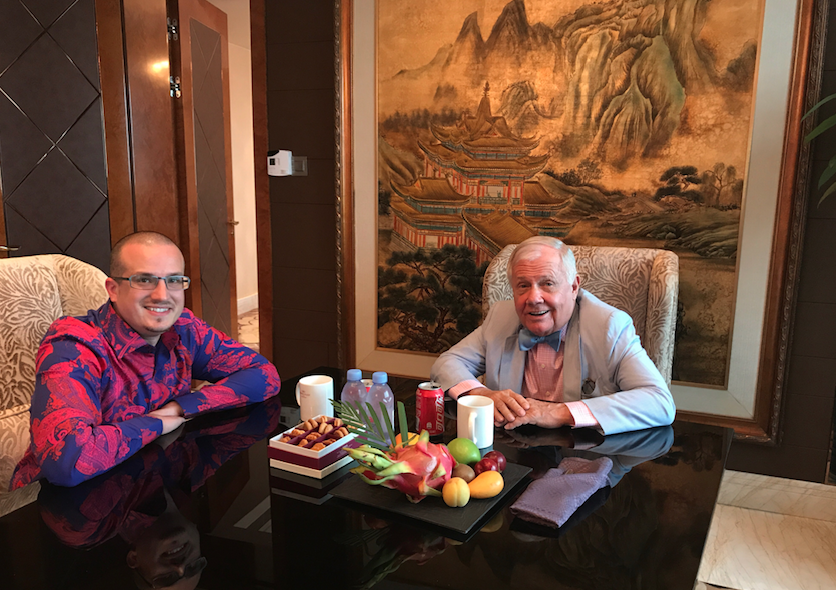 I recently kicked off a 16 event tour of China with iconic investor Jim Rogers. Our message is simple and our team will post some footage from the events once the tour is over. Jim Rogers believes that we are in an economic environment that has no historical reference point, a big crash lays ahead and China will be the superpower of the 21st Century. Here is a quick video that summarises his thoughts:

My part of the talk focuses on why Bitcoin is a black swan invention that will never be repeated again and how that relates to all its children that have come from Bitcoin as a result – Altcoins, Blockchains, ICO’s etc.. We will save Jim Rogers new found enthusiasm for digital currencies for when we release the footage.

As there is so much new money jumping into this sector, BnkToTheFuture created a simple video on why Bitcoin matters for beginners that may be drowned in all the noise on alternatives to Bitcoin:

Then come the questions and answers part of the presentation.

1. People keep asking me what #Altcoin or #ICO to buy. It’s simple – #Bitcoin is the only store of value & gamble 10% of your $BTC on whatever you want if you’re willing to lose it.

3. People keep asking me if it’s too late to own #Bitcoin. It’s simple – it goes up long term as long as non-speculative demand is greater than supply. Right now demand keeps going up and supply keeps increasing at a slower rate.

4. People keep asking me how to get started responsibly. It’s simple – take 10% of your income that you are willing to risk and hold it in #Bitcoin, if you want take 10% of that $BTC and make more speculative investments in the sector.

5. People keep asking me if digital currency will take over fiat currency. It’s simple #Bitcoin is like a global savings account that allows you to send it to anybody, anywhere, but it’s a foreign currency for everybody and you will always make many of your local purchases in your local currency for as long as its stable. You don’t want Bitcoin to be stable as it would lose its investment appeal.

6. People keep asking me if #Ethereum is taking over. It’s simple $ETH needs $BTC as a store of value to survive. It does not have an essential #Blockchain building block – an anonymous founder that can’t be attacked and today its user cases are all speculative. Not sure if that will change.

7. People keep asking me how to analyse a good coin. It’s simple. Eventually utility value has to be larger than speculative value and non-speculative demand for the coin has to be greater than the supply over the long term. In the short term as long as speculative value is greater it can go up based on nothing and can fall even faster.

8. People keep asking me if everything needs a #Blockchain. It’s simple – if your sector suffers from censorship then you may need a Blockchain that has an anonymous founder, is public and has enough Hash power to be secure. Only one of those I know today #Bitcoin. Every other #Blockchain comes with unacceptable long term risks, but may have good short term features.

9. People keep asking me if central banks will use a #Blockchain. It’s simple – central banks don’t want to give up income from printing money and governments don’t want cash. I believe they will settle on a stable centralised digital fiat currency, NOT a Blockchain.

10. People keep asking me if #Bitcoin will scale to meet the huge demand. Good question – that underpins the future of the entire sector and whether #Blockchain works or not because no other #Blockchain has all the properties needed to qualify as a #Blockchain yet.

We have just reached consensus, but the journey to scale Bitcoin continues. It has some of the smartest people in the world behind it and We will continue investing in the sector until it becomes clear it cannot scale. I believe too many people need it to let that happen and too many people care.